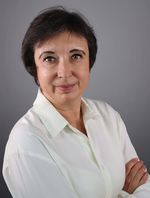 Nataliia Medzhybovska studied at the Odessa Institute of National Economy (Ukraine), with main focus on economics and industrial planning.

After that she worked as an engineer in the Department of Mathematical Modeling of Production, Economic and Ecological Systems of the Odessa branch of the Institute of Economics of the Academy of Sciences of the Ukrainian SSR (1988-1990), and as the software engineer of the research and production enterprise "Compinform" (1991).

In 1996 she graduated the postgraduate program of the Odessa Institute of National Economy and received the degree of Candidate of Economics Science in the specialty of "management".

In 2001 she was awarded the academic title of Associate Professor.

In 2013 she graduated the doctoral program of the Odessa National Economic University and received the degree of Doctor of Economics Science in the specialty "economics and enterprise management".

In 2015 she was awarded the academic title of Professor.

She performed the duties of the key person (coordinator) responsible for the academic component of Tempus Project “Two cycle E-Commerce curricula to serve Information Society in Russia, Ukraine and Israel” (2011-2014).

She is the author of more than 200 published issues, including 4 monographs (including 1 individual one), and 7 textbooks (including 4 individual ones), some papers are published in English and ranked by Scopus. She has been awarded by Ukrainian government awards several times, namely Gratitude for many years of conscientious work, significant personal contribution to the training of high-quality specialists, and fruitful scientific and pedagogical activities from the Ukrainian Minister of Education Sergey Shkarlet (2021), Certificate of Honor for many years of work in the higher education system, significant personal contribution to the training of highly qualified specialists for the Ukrainian economy, high professionalism from the Chairman of the Odessa Regional Council Anatoly Urbansky (2016), etc.